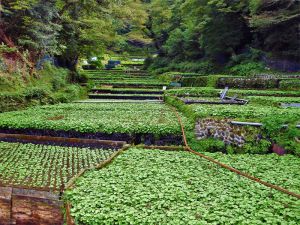 Wasabi is a plant originating from Japan and is well-known condiment often served with sashimi, sushi, and soba noodles. The “root” or stem of the wasabi plant is finely ground into a paste to make this condiment. However, the leaves are edible as well and are eaten boiled, pickled in soy sauce, or fried as tempura. The Japanese tubular wasabi paste often used in Japanese households often contain Western horseradish, and it is in fact rare to see real Japanese wasabi even in Japan. 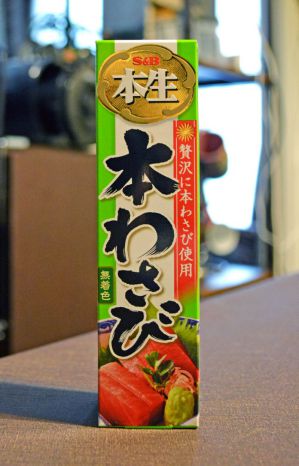 The earliest record of wasabi dates back to the year 685. The spread of sushi and soba noodles in the Edo period greatly popularized wasabi in Japan. This led to wide-spread cultivation, which is thought to have started during this era.

Wasabi is generally available in powder form or in tubes. Most of the wasabi sold in supermarkets around Japan only contain a small amount of wasabi, and are comprised mostly of Western horseradish.

In some classy restaurants, real wasabi is served with a grate.

Wasabi requires clean water and a strict environment, found in only some mountain river valleys in Japan.

In Japan, wasabi is mainly produced in Nagano and the Izu Peninsula of Shizuoka Prefecture. It is also produced in mainland China, Taiwan, and New Zealand. Since wasabi only grows in clean water, it is a very hard plant to cultivate.