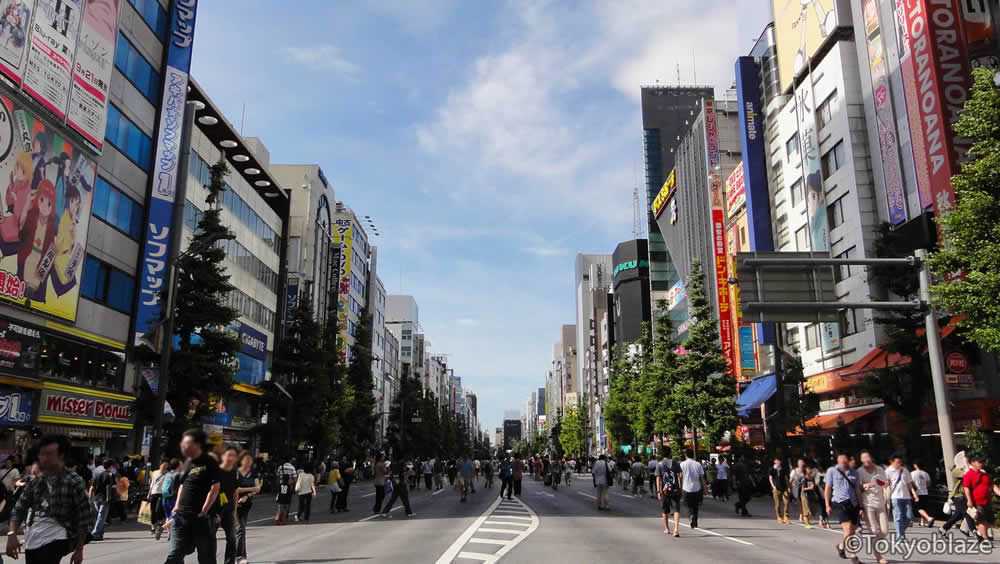 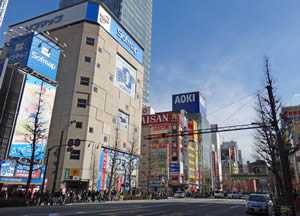 Akihabara. The large building on the left is the main store of Sofmap.

Akihabara, or “Akiba” as it is commonly known, is a district famous for its many shops selling all kinds of electronics. Recently, there has been an increase in shops associated with manga and anime, and subsequently, the area has turned into the holy ground for otaku culture in Japan.

Akihabara’s reputation as an “Electric Town” started out in the post-WWII era when stores selling vacuum tubes and radio parts formed a black market in the region. In the 1990s, the area saw a relative decrease in stores selling home appliances, with PC, software, and video game stores targeting game and anime otakus(enthusiasts) taking their place. Gradually, otaku culture spread throughout Akihabara and by the 2000s, Akihabara was portrayed as the “holy ground for subculture”. This trend continues to this day with Akihabara gaining a worldwide reputation for otaku culture, anime, and manga.

You can walk a large part of Chuo-dori, Akihabara’s main street freely during Hokosha Tengoku(pedestrian heaven).

Akihabara has hundreds of shops specializing from vacuum tubes to doujinshi to plastic models to PC parts. Basically, there’s a shop for everyone’s interests.

There are many electronics retailers in Akihabara. The biggest one is the huge Yodobashi Camera store on the north side of the station. On the main street are Onoden, Laox, Edion, Tsukumo and the famous Sofmap which has 9 stores in Akihabara.

Yodobashi Camera – The Yodobshi Camera store in Akihabara is known as “Yodobashi-Akiba” and is the largest electronics retailer store in the area. On the eighth floor are restaurants and on the seventh floor are CD, apparel, and book stores.

Sofmap – Each of the stores of Sofmap differ in the products they sell; for example, one shop specializes in selling Macintosh computers, another specializes in anime and video games, and another specializes in buying and selling used PCs. The main store of Sofmap has no specialty and sells everything electronic in general. Sofmap also assembles and sells their own lineup of high-performance desktop PCs called “Burger PCs”. The PCs are named after different types of burgers; for example there is a desktop PC called “Cheeseburger” and another called “Teriyaki Burger”.

Tsukumo – Tsukumo has 4 stores in Akihabara and sells mainly PCs and PC parts. The black Tsukumo ex. store on Chuo Dori, Akihabara’s main street, has 7 floors all dedicated to PC parts and accessories. It is owned by Yamada Denki.

Yamada Denki – In front of the “Denki-gai(Electric Town)” exit in Akihabara station is Yamada Denki. Yamada Denki has stores in every prefecture in Japan. A large store is present in Ikebukuro. 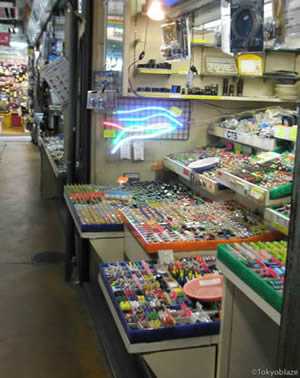 An Electronic parts shop in Akihabara

Although their numbers have been decreasing, there are still many electronic parts stores in Akihabara. Below the Sobu Line railway is the Radio Center, a shopping area with shops specializing in everything from capacitors, LEDs, transformers to ham radio. There’s also the Tokyo Radio Depart (“Depart” is an abbreviation for Department Store), an electronics parts shopping area similar to Radio Center. Both of these have a long history, and you can get a glimpse of how Akihabara was like before otaku culture flourished.

The demand for electronics parts has shifted to microcontrollers in recent decades and shops handling those items have seen increasing popularity. Some of those shops include Akizuki Denshi, Sengoku Denshou, and Marutsu Parts. Unlike the shops inside Radio Center and Radio Depart, these shops operate independently in relatively large shops a little off from the main street. 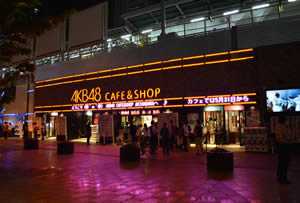 AKB48 cafe & shop. To the left is the Gundam Cafe.

Subculture-related shops can be divided into many categories. If you want manga or doujinshi, you might want to go to K-BOOKS, Melon Books, Mandarake, or Tora no ana(とらのあな). If you want plastic models of tanks, anime figurines and goods, dolls, and trading cards, you might want to visit the yellow Radio Kaikan(ラジオ会館) building near the station which has many shops handling hobby-related products.

On the main street is a discount chain store from Don Quijote(ドン・キホーテ), which sells a wide range of products from apparel to electronics.

There’s also many maid cafes and the recently built AKB48 cafe and the Gundam Cafe. Please note that the food served at some of these places is usually more expensive than that of normal restaurants.

Many game centers also line the main street of Akihabara and are popular with young people.

Akibaoo(あきばお～) is a famous retailer that sells a myriad of products and has 9 small-scale stores in the Akihabara area including some on the street mentioned above.

Also on the street is Dospara(ドスパラ), a retailer specializing in custom-made, high-performance PCs.

If you want to sell your smartphone or buy a used one, the IOSYS store or JANBARA(じゃんばら) on the main street may be a good place to go. If you want to use a phone overseas, make sure that the phone is SIM-free before buying.

For the visitors coming from overseas, there’s the duty-free shops. Since Japan is seeing an increase in consumption tax, it may be a good idea to buy at a duty-free shop. However, Japan’s consumption tax is still lower than many European countries so the difference in price between duty-free and non-duty-free may be minimal for some products.

Shinjuku Gyoen is a large public park in Tokyo featuring many landscapes including an English landscape garden, French formal garden, and a traditional Japanese garden.