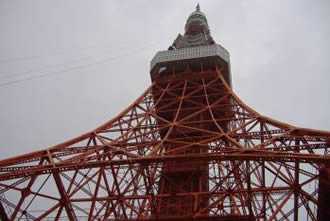 Tokyo Tower on a cloudy day

The orange and white facade of this Tokyo landmark was built during the post-war era of the 1950s and has long served as a broadcasting station for TV signals. However, with the construction of the newer and taller Tokyo Sky Tree, Tokyo Tower has given up most of its broadcasting to the Sky Tree and now mainly serves as a rather old-fashioned tourist attraction. You can still get some stunning panoramic views from its two, “main” and “special” observation decks which are 150m and 250m above sea level respectively. You can also test your nerves by walking on top of the look-down window, situated on the floor of the main observation deck.

At the base of the tower are many restaurants, souvenir shops, a McDonald’s, and an aquarium. There also used to be a wax museum but it closed in 2013.

Another side of Tokyo Tower can be viewed at night, when the tower lights up. The illumination may change during festivities, and for causes such as breast cancer awareness (pink), World Diabetes Day (blue), and World Refugee Day (UN colors).

Also note that, tickets may sell out early, and that the observation decks maybe closed on occasions of inclement weather.

Tokyo Tower can be accessed by train from the three closest stations listed below.