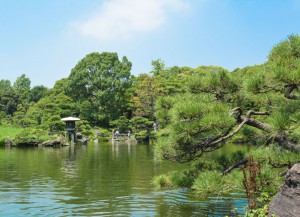 About
Kiyosumi Garden(Kiyosumi Teien) is a traditional Japanese garden located on the east side of Tokyo.
The garden was constructed by the founder of Mitsubishi, Iwasaki Yotaro  and opened as “Fukagawa Shinbokuen” during the Meiji era. It was used as a place for guests and a place of recreation for the employees of Iwasaki’s businesses. Following the Great Kanto Earthquake of 1923, the east side of the garden was donated to Tokyo City and opened to the public as “Kiyosumi Teien”(Kiyosumi Garden) in 1932. The garden features fifty-five rocks which the Iwasaki family collected from all across Japan and a large pond(Daisensui) which has three islands inside. The pond was previously supplied by the Sumida river but is now supplied by rainwater.

Ryotei
The park has a lakeside building called the Ryotei, which was originally built by the Iwasaki family in 1909 to welcome General Kitchener of Great Britain on his official visit to Japan. The building survived the Great Kanto Earthquake and World War II but was reconstructed in 1985. 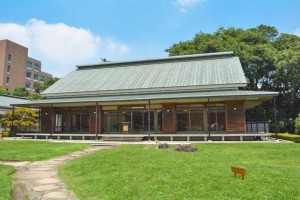 Access & Admission
Regular admission is 150 yen for adults, 70 yen for people 65 and older, and free for elementary school kids and younger.(July 2015)